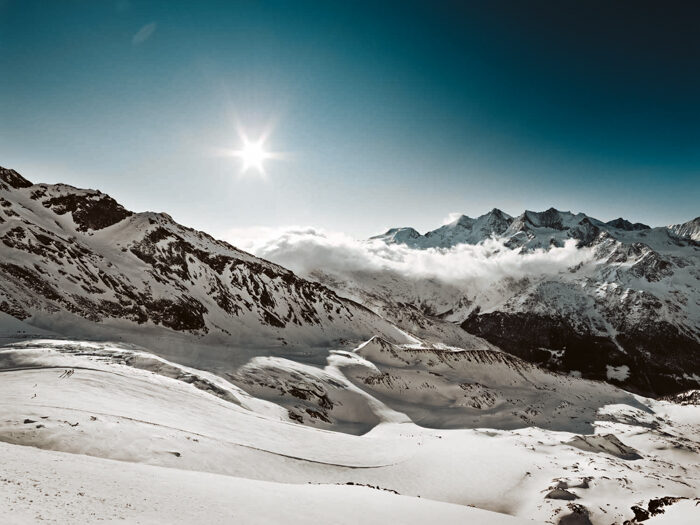 get to know saas-fee in wallis in 19 facts!

Are you a fan of skiing and are you thinking about going to Saas-Fee? I’ve been going to Switzerland for 33 years now and I have a soft spot for the country. Once you get out of the car or train and breathe in the fresh mountain air… Such a lovely feeling! I’ve recently been to the beautiful Wallis for a long weekend and I went skiing in Saas-Fee there. A stunning villagge in Wallis that is surrounded by 18 mountaintops that are over 4.000 metres high. You can imagine: a magical sighting!

The village Saas-Fee is situated at the foot of the glacier the Fee and still has that real authentic Swiss feeling, despite it being a popular luxurious ski destination. Waking up with a view of the mountains is was gives me the ultimate feeling of Wanderlust. Just unwind completely and get away from the city for a while. I LOVE IT! Perhaps it’s because skiing is one of the few sports that I’m actually pretty good at, but the annual ski trip is a vacation I wouldn’t easily miss out on! In this Saas-Fee Travel Guide I’ll line up 19 facts for you so you’ll have a decent image of the village in no time. 19 x good to know about Saas-Fee in Wallis (switzerland)

1. Saas-Fee is also know by the nickname ‘Pearl of the Alps’ and this popular ski resort is located in the canton Wallis.

2. Saas-Fee is located in the Saas Valley and is surrounded by 18 mountain tops that are over 4.000 metres, among which is the highest mountain of Switzerland, “The Dom” which is 4.545 metres. Believe me when I say it is impressive waking up and openings the curtains of your hotelroom and watch yourself being surrounded by these mountains!

3. If you want to go to Saas-Fee by plane it’s best to book a ticket to Genève, Zürich, Basel or Milan. From this cities there are direct connections to Brig or Visp that leave several times a day (but mostly every hour).

4. Postbus 511 leaves from Brig and Visp to Saas-Fee every half hour. 5. You can go skiing in Saas-Fee from mid November to half of April. In the summer it’s still possible to go skiing on the glacier. There is a slope of 20km open then and you can go skiing from 7.30AM to 12PM. 8. One of the things that gives Saas-Fee its charm is that is completely car-free. Definitely don’t let that stop you because you think it’s too much of a hassle to carry your bagage around. There are eletrical carts that can pick you up at the parkings spaces or busstation and drop you off at your hotel. The more luxurious hotels, like The Capra, have carts of their own and are happy to pick you up. 9. Another thing that makes Saas-Fee a charming place is the architecture. Don’t expect big ski condos, but chalets and apartments that are built in the typical Swiss style. Across the entire town you’ll find some old farmers’ barns that give you the feeling you’re in the real Switzerland!

11. Are you a sucker for the song “Last Christmas” by WHAM!? In that case you’ll definitely want to go to Saas-Fee, because the famous chairlift of the videoclip was shot in this town.

12. Saas-Fee has two 5-star hotels, namely The Capra and Hotel Ferienart Resort & Spa Hotel. During my last trip to Saas-Fee I stayed in The Capra and if your budget allows it, I can definitely recommend it to anyone!

13. Have you heard about the WinterCARD yet? It’s sort of a crowdfunding campaign where you can register for a seasons ski pass. You can go skiing for the entire season then for Fr. 222,-, that is if the minimum amount of passes will be reached. The quote for 2016 is 77.777. Just after 3 days it’ll be worth the expenses!

14. For a great view: Saas-Fee hosts the highest revolving restaurant in the world. 15. The Spielbodenbahn has been renewed completely in the winter of 2016 and it’ll now take you even faster (and warmer!) to the top of the mountain.

17. For the speed demons among us there’s the Adrenalin Cup. In this ski area you can test your ski skills in ten disciplines! On ten different places on the slopes of Saas-Fee and Saas-Algemall you can test your skills while they take a photo and a video. You can check your scores online afterwards!

18. Would you like to reminisce after skiing in the wellness? Lots of the more luxurious hotels have their own spa, but you can also go to Aqua Allalin for a (mid)day. A lovely wellness with a view of the mountains! Tip: Looking for more information on Saas-Fee? Take a look at the websites Saas-fee.ch or Myswitzerland.com!