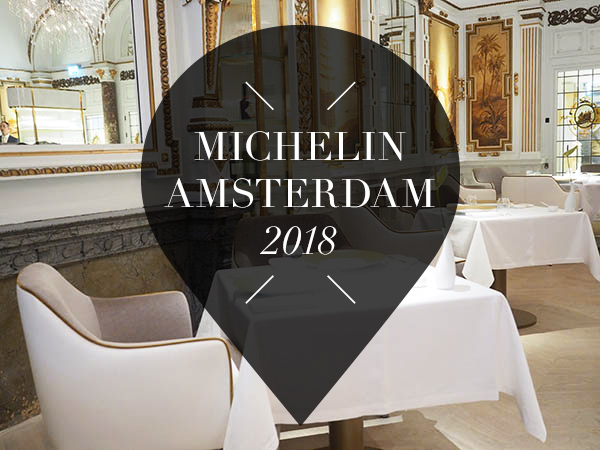 These are the Michelin-star restaurants in Amsterdam in 2018

congratulations to the duchess, le restaurant & the white room!

Ciel Bleu: Since 2008 the restaurant Ciel Bleu of the Okura hotel is the proud owner of two Michelin stars.

Librije’s Zusje: Chef Sidney Schutte and his team have their two stars of the restaurant of the Waldrof Astoria  for two years already.

&Moshik: Formerly &Samhoud Places, the restaurant that opened in 2012 and got its two stars already after three months. Led by chef Moshik Roth. The Duchess: Big surprise this year is the star for The Duchess in the W Hotel. The dishes are inspired by the French-Italian cuisine.

The White Room: The White Room, led by signature chef Jacob Jan Boerma, also received their first star this year. But a special applaus for Chef Arturo Dalhuisen who runs the kitchen on a daily basis. So deserved!

Bord’Eau: The cuisine of the restaurant gastronomique of Hotel De L’Europe will be taken over by Bas van Kranen on January 1.

Bolenius; Hidden among the skyscrapers of the Zuidas chef Luc Kusters and his team are cooking the best dishes full of natural flavors.

Bridges: The fish restaurant, inspired by Ron Blaauw, on the Oudezijds Voorburgwal keeps surprising you with the refined dishes.

Lastage: At Lasagne they’ve put the star in the basement, because chef Rogier van Dam doesn’t want to show it off. His main goal is to keep cooking delicious meals for an affordable price.

MOS: Led by chef Egon van Hoof the most delicious French-international dishes are served in a chic but relax setting on a beautiful location at MOS Amsterdam.

RIJKS: It’s not only the first star for RIJKS of chef Joris Bijdendijk, it makes RIJKS the biggest starred restaurant of the country as well.

RON Gastrobar: The golden combination of urban gastro-bar with a cool, bubbly vibe and delicious sensational dishes keeps its star of course.

Sazanka: At this teppanyaki restaurant of the Okura Hotel chef Masaori Tomikawa takes you along on a culinary trip to Japan.

Yamazato: But also in the next door Yamazato in the Okura hotel you can wine and dine the Japanese way.

Sinne: Classic French dishes with a twist from the Mediterrean and Oriental cuisine led by chef Alexander Louannou.

Vermeer: Chef Chris Naylor and his team are cooking the stars from heaven in the restaurant of the NH Collection Barbizon Palace Hotel with vegetables from their own vegetable garden.

Vinkeles: The restaurant of The Dylan where you enjoy the best dishes of chef Dennis Kuiper in a comtemporary setting.

Enough Michelin starred restaurants in Amsterdam to choose from next year!