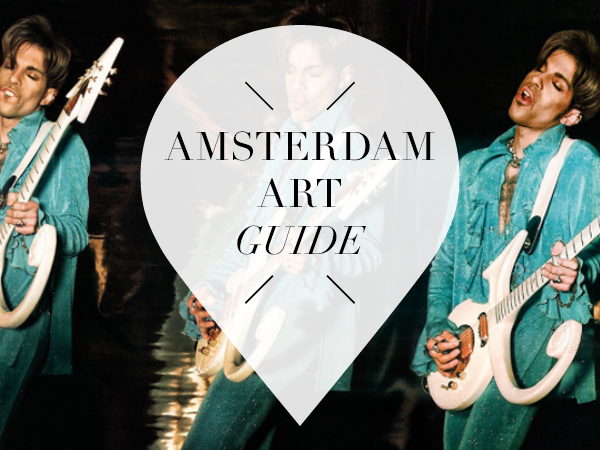 Let’s get arty farty, visit these exhibitions in Amsterdam

Want to do a cultural activity in Amsterdam today? No problem! There are enough interesting museums and art galleries in our capital. That’s why we made a selection here on Your Little Black Book, with expos we think would be interesting for you too. In the Amsterdam Art Guide, we monthly share the most amazing exhibitions in Amsterdam which you don’t want to miss. Enjoy! Ps: don’t forget to visit the museum shops, here they have the nicest books!

Ps: Do you want to know what there is to do in Amsterdam? Subscribe to the Yourlbb newsletter and stay up to date!

16 X exhibitions in Amsterdam to see this month

Eduard Planting Galerie – Legens Passed: Until September 23 you can go to Legends Passed at Eduard Planting Galerie, they give a tribute to legends that are no longer with us. Think of Prince, David Bowie, Muhammad Ali, Chuck Berry, Johan Cruijff and Roger Moore. Let yourself be enchanted by seeing nostalgic portraits of the legends that we still miss each day.
Until September 23 2017 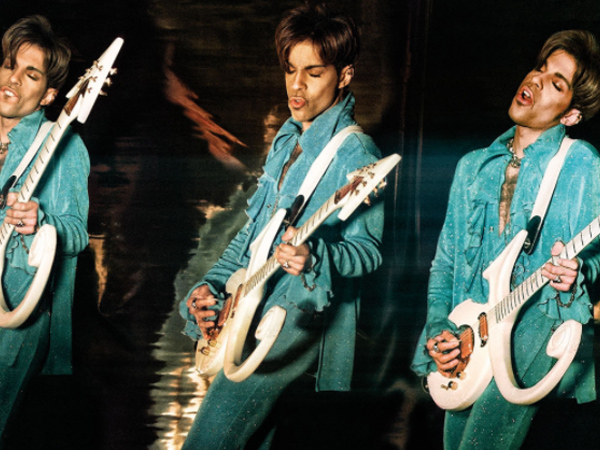 Museum van Loon – Iris van Dongen: This year the Thérèse Schwartze Prize is awarded to artist Iris van Dongen (Tilburg, 1975). Because of this prize, some portraits of Van Dongen are exposed at Museum Van Loon in Amsterdam. Iris Van Dongen usually portrays women and uses charcoal, pastel chalk and paint in her portraits. In her portraits, patterns are a the solid element; both the background and the clothing of the portrayed often multicolored motifs. All of this gave her the Thérèse Schwartze Prize.
Until September 4 2017

Foam – Roger Ballen en Asger Carlsen – No Joke: In No Joke two artists investigate the bizar, selfish collages of the dark side of the human psyche. Although their methods are the opposite of each other, they do share an interest in the sinister side of the human subconscious mind. The duo made 37 images together. The work calls makes you feel afraid but also brings up a desire that often only occurs in your dreams.
Until August 27 2017 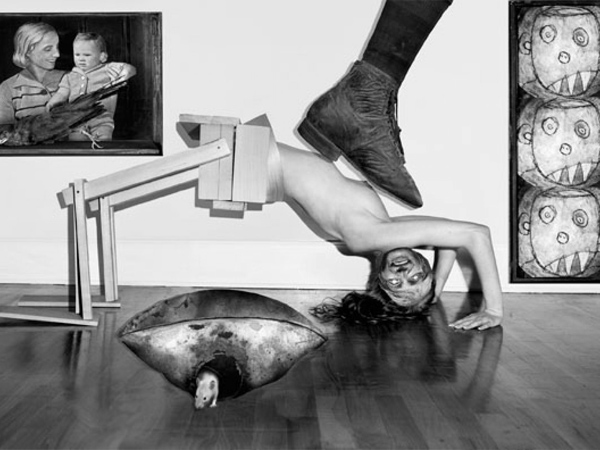 Stadsarchief – Isabella Rozendaal – Animalia Amsterdam: Until September 3 you can visit the exhibition Animalia Amsterdam from photographer Isabella Rozendaal in Stadsarchief Amsterdam. Isabella photographed pets from Amsterdam for a year. Think of dogs, cats, pigs and giant slugs. Pets take the feeling of loneliness in the big city away and make sure we take care of somebody. This exhibition shows that in a beautiful way.
Until September 3 2017

Foam – Gordon Parks – I Am You: This photographer is mainly known for his black and white work, but in this exposition you also see a lot of his work in colour. Gordon Parks used photography to capture and share the division of society in America. He fought for equal rights for Afro Americans and wasn’t afraid to talk about themes like poverty and injustice.
Until September 6 2017

Stedelijk Museum – Jana Euler: High in Amsterdam, The Sky Of Amsterdam: At the exhibition High in Amsterdam, The Sky of Amsterdam, we can see ‘old’ work by the German artist Jana Euler, and work she has made specifically for Stedelijk Museum. Paintings, images and texts that can’t be described as one style, they are abstract and figurative. She knows how to deform and twist classical themes from art history, after which she confirms them with a dull and dry humor again. Jana challenges the perception and definition of reality and images.
Until October 15 2017 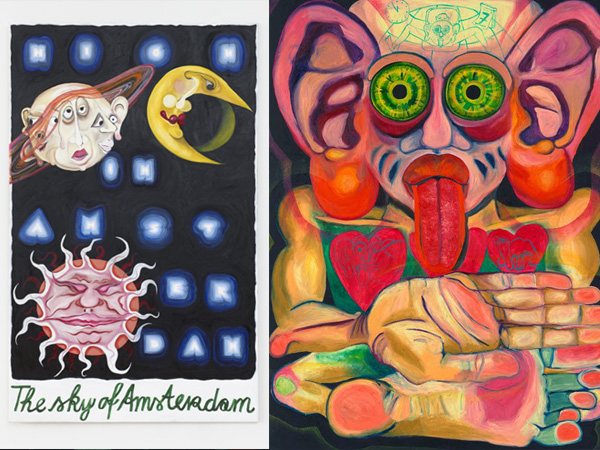 Stedelijk Museum – Edward Krasiński: Krasiński was one of the most important artists from Eastern Europe. He was inspired by the pre-war avant-garde movements, one of them being the constructivism. His work mainly exists of dynamic sculpturen and big installations, which can now be seen at the Stedelijk Museum.
Till October 15 2017

Huis Marseille – Lionel Wendt / Ceylon: The photographer Lionel Wendt (1900-1944) from Sri Lanka seems to be re-discoverd. The work he used to make was eclectic: from sensual and homo-erotic portraits to tropical images of Ceylon (now Sri Lanka), and from picturesque scenes to compositions for which he used modernist stylistic devices and experimental techniques. After his death, most of his negatives were destroyed, but the work he left behind lives on. In Huis Marseille you can see some of his work, until later this year.
Until September 3 2017

Eye Filmmuseum – Martin Scorsese – The Exhibition: Martin Scorsese (1942), director of classics like Taxi Driver, Raging Bull and The Wolf of Wall Street has developed a unique film handwriting by this time. Grown up as a son of Italian immigrants in Little Italy, New York, he sketches an enchanting view in his films on this close environment in which family, faith and trust are central subjects and values. The first major exhibition about Martin Scorses’s work, life and passion will be featured in EYE Filmmuseum’s rooms from May 25th. Plus a lot of Scorsese’s favourite movies.
Until September 3 2017 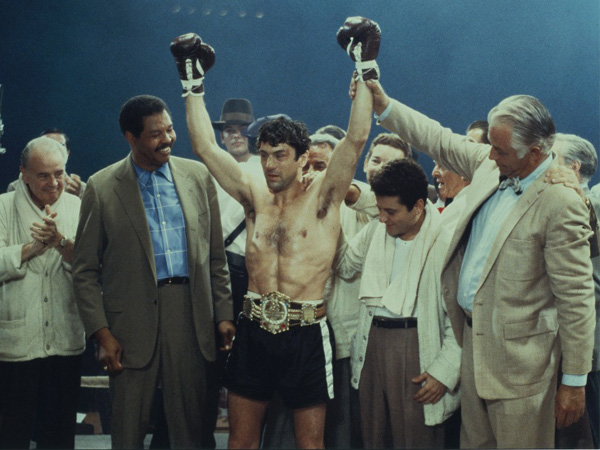 Stedelijk Museum – Seth Price – Social Synthetic: At the Stedelijk Museum we can visit the first exhibition of the American artist Seth Price. Over 140 works such as sculptures, installations, 16mm films, drawings, paintings, videos, clothing for textiles, web design, music, sound and poetry since 2000 are featured over here. Seth Price does not limit himself to one medium or style, it may be clear, but he repeatedly explores new areas. His innovations, interests and themes have a major influence on his own generation and younger artists, partly due to his approach to digital manipulation and cultural transformation.
Until September 3 2017

Foam – Adam Jeppesen – Out of Camp: The work that you can see in this expo is the result of a 487-day long trip from the North pole to Antarctica, made by the Danish artist Adam Jeppesen. Beautiful landscapes and an atmosphere of tranquility. The trip he made wasn’t just a search for spirituality but was also about the transience of a photo as an object. Something which you can see when you look closely at the pictures. You will see the damages and traces of his journey. He was once searching for the perfect print, but isn’t anymore and uses cheap techniques nowadays. We live in a time where pictures get edited so much, so Jeppesen is the opposite of this.
Until August 27 2017

Moco Museum – Banksy – Laugh Now: On the ground floor you can go to Banksy: Laugh Now. About 50 works can be seen here from the street art legend, and you have to see it at least once. It’s the first time in history that there’s an exhibition with the work of Banksy. You can also go to the beautiful exhibition of Salvador Dalí. 28 years ago one of the most famous artists died and his most iconic work as for example the melting clocks and tables with ‘high heels’ are ready to be seen at the Moco Museum.
Salvador Dalí till August 30 2017
Banksy till August 30 2017

Rijksmuseum – New Realities: When you go to the expo New Realities, you will see works of well known photographers like William Henry Fox Talbot, Julia Margaret Cameron, Roger Fenton and Gustave Le Gray but also work from anonymous surprises. There is special attention for the first female photographer Anna Atkins, who made the first ever photo book. After seeing this expo, you get a better view on how rich and diverse photography in the 19th century actually was.
Until September 17 2017

Make a boat tour and enjoy the Amsterdam Light Festival from the water during a cruise on the canals. 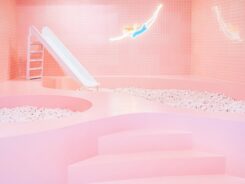 This new experience with unique and colourful installations is the Instagram hit of Amsterdam. 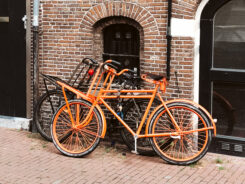 Experience Amsterdam like a local and rent a bike or book a bike tour for the real Dutch experience.

This trendy hotel with a rooftop, restaurant and club is located in hot and happening Amsterdam East.

This lifestyle hotel is located on Herengracht in the Canal District and also loved by locals.

Looking for a budget proof stay that still looks great? Then Generator Hostel is your spot! 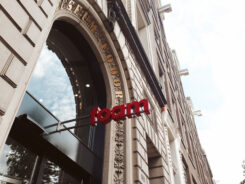 Visit the number one photography museum of Amsterdam for exhibits about contemporary photography.

One of the most Instagrammable places in Holland during this season! 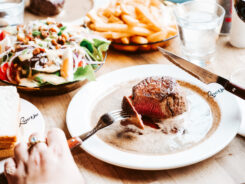 Cruise for 75 minutes and eat the famous Loetje Steak! (or veg or fish)