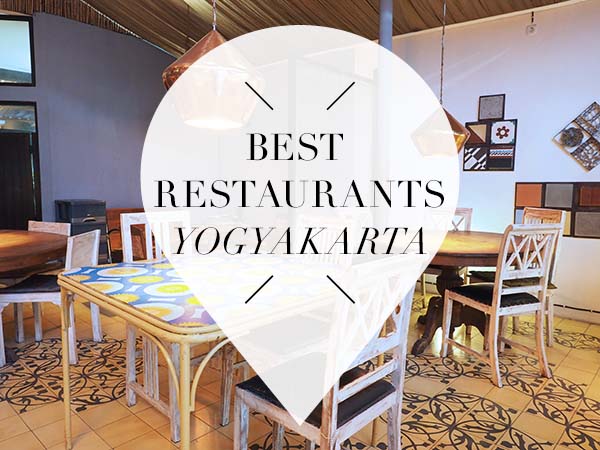 this is the ultimate food guide for yogyakarta, indonesia!

Who loves good restaurants came to the right place in Yogyakarta in Java, Indonesia. Yogyakarta is a great city to stay in for a couple of days anyway, while on a round trip in Java. Lie down by the pool or visiting one of the many beautiful tempels and palaces during the day, and in the evening have some dinner at one of the many hotspots the city has to offer. Don’t expect it to be as hip as in Bali, but there is definitely something going on in Yogyakarta when it comes to restaurants. Just in the few days alone that I was there I’ve spoken to several entrepreneurs that had just opened a new place on the trendy street Jl. Prawirotaman in the eponymous area Prawirotaman. In this blog I’ll line up my favourite restaurants in Yogyakarta for you!

Via Via: A restaurant not to miss in Yogyakarta is Via Via. This restaurant is perfect for vegetarians! Not only is the food at this hotspot delicious, the interior is also very nice. Lots of wood, street art paintings on the walls and they also serve alcoholfree drinks. It was one of the first spots in Yogyakarta that I went to and definitely one of the best! Make sure to order the dish with the eggplant.
Jalan Prawirotaman No. 30, Yogyakarta, Indonesia 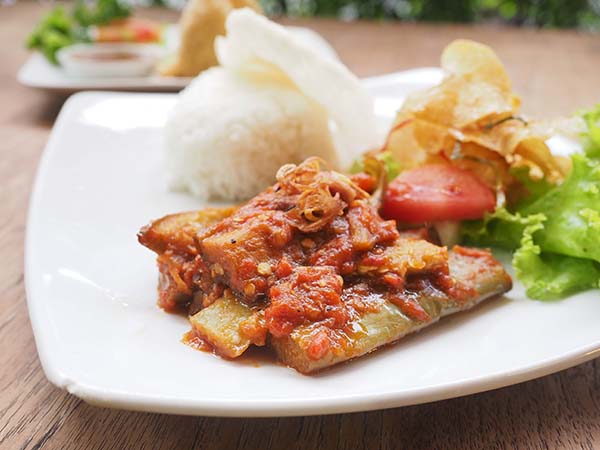 Lawas 613 Cafe: Next to the Adhisthana Hotel is this cutely designed restaurant. It kind of has an open terrace on the balcony where it’s a lovely stay. On the menu you’ll find a mix of Indonesian and international dishes. Also a nice place to have a coffee or to have a seat with your laptop to work for a bit.
Jalan Gerilya Prawirotaman II No. 613, Yogyakarta, Indonesia 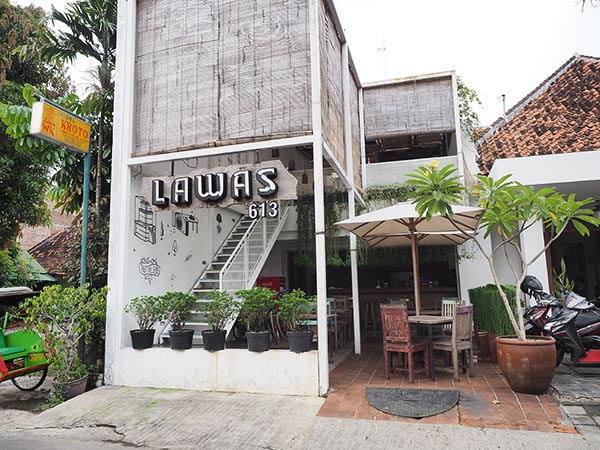 Mediterranea Restaurant by Kamil: Don’t feel like authentic Indonesian food for a change? You came to the right address at Mediterranea. This is one of the most popular restaurants in Yogyakarta and definitely loved among the expats that live in the city. The interior has a little bit of an Italian and Greek vibe. Is there no rain predicted? Make sure to ask for a table in the courtyard! At this restaurant in Yogyakarta there’s also a small store where they sell biological products and delicious bread.
Jalan Tirtodipuran No. 24 A, Yogyakarta, Indonesia 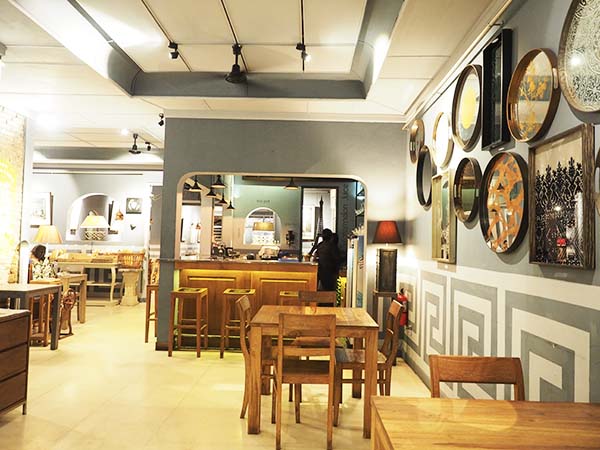 Roaster & Bear: During the day you can come here for a coffee and in the evening for dishes of the international menu. Think of steaks and more of this kind of tastiness!
Jl. Margo Utomo No.52, Yogyakarta, Indonesia

Dixie: Craving Indonesian food, but not from a local Waroeng? Dixie is the right place for you then. In here the crowd is a mix of people, but you’ll definitely see some of the local hipsters here too!
Jalan Affandi No. 40B, Yogyakarta, Indonesia

Poka Ribs: Most of the residents of Java are muslim and that’s why you don’t find many restaurants that serve pork. At Poka Ribs you can go for some really good ribs for an affordable price.
Jl. Prawirotaman No.1, Yogyakarta, Indonesia 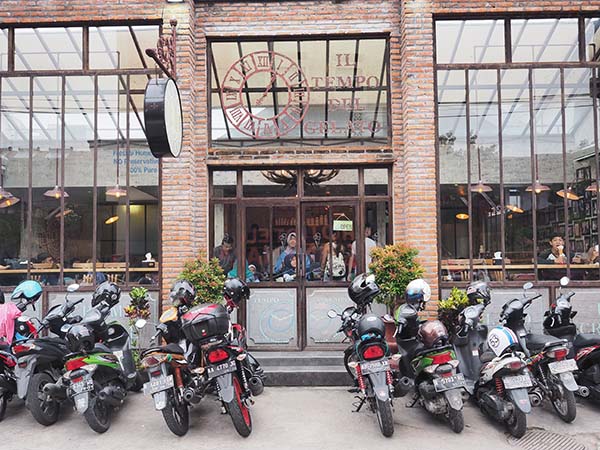 Sellie Coffee: One of the nicest coffeeplaces in Yogyakarta is Sellie Coffee. You’ll find this coffeebar across the Adhisthana Hotel. They serve good coffee here and small bites. Open from early till the end of the afternoon.
Jalan Gerilya NG 3 / 822, Prawirotaman 2, Yogyakarta, Indonesia 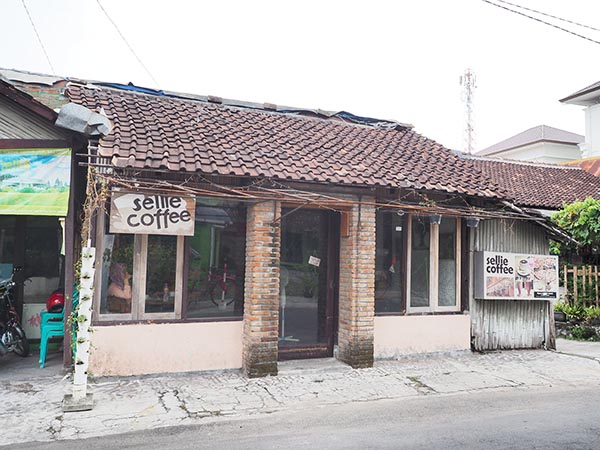 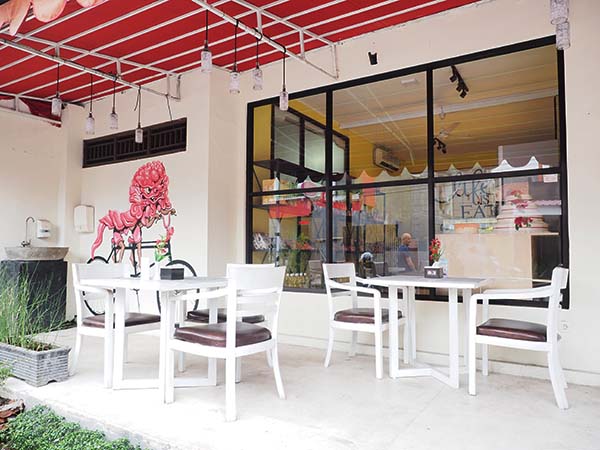 Yam Yam: Craving Thai food? If so, in Yogyakarta Yam Yam is the place to go to. A Thai restaurant with a modern Western twist. Tasty curries with fish or meat and rice!
Jl. Prawirotaman No.39, Yogyakarta, Indonesia 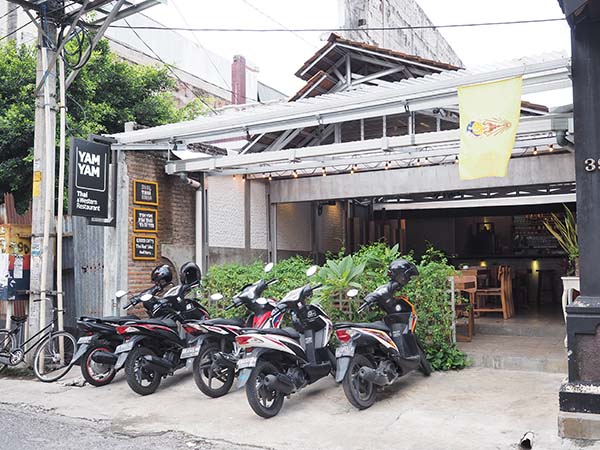 Move On: During the day it’s a coffeebar where they serve specialty coffee and in the evening this hotspot changes to a cafe where they specialize in craft beer. They serve lots of beers from South Korea here! At Java they don’t serve beer everywhere so if you feel like going for a beer one evening this spot is a must visit.
Jl. Prawirotaman No.4-10, Yogyakarta, Indonesia 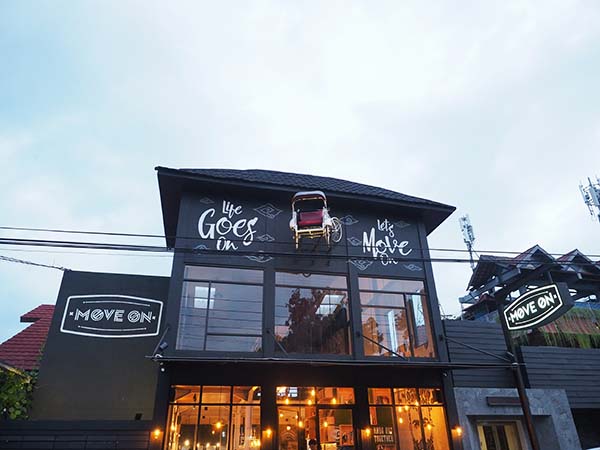 Ruang Seduh Jogja #RSJ: This is without a doubt the most hip coffeebar I’ve been to in Yogyakarta. This bar could’ve just as easily be set in Tokyo or Seoul. They make slow coffee here that’s being made with precision! The interior is light and white and this coffeespot is especially popular among the local hipsters.
Jl. Tirtodipuran No.46, Yogyakarta, Indonesia

Mouton: At the moment that I strolled around on Jl. Prawirotaman Mouton just opened. Another one of those restaurants with a trendy interior and cool street art-like drawing painted walls. I personally love Korean BBQ and this comes really close to that. On your table is a grill where you can grill your own meat with your friends!
Jl. Tirtodipuran No.67, Yogyakarta, Indonesia 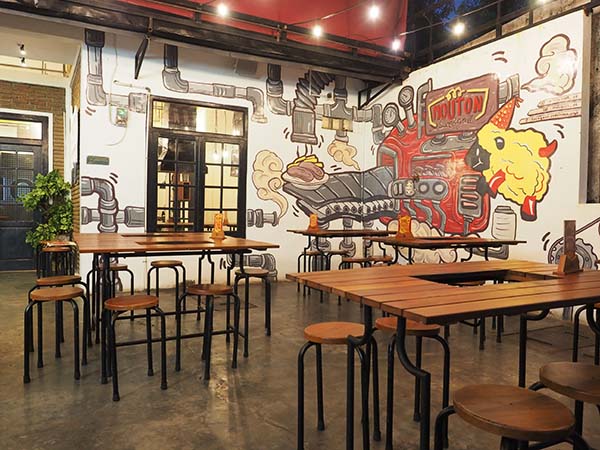 Papricano: The Mexican food trend has reached Yogyakarta too. For Mexican street food like tacos you go to Papricano Mexican Cantina. If it’s not raining it’s a nice place to sit on the terrace!
Jalan Tirtodipuran No. 38, Yogyakarta, Indonesia 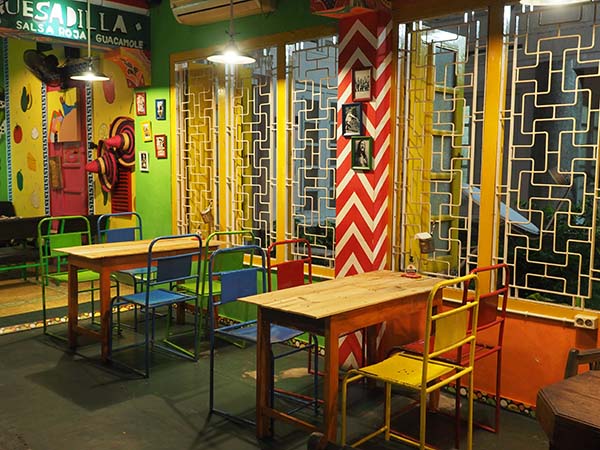 Oxen Free: Feel like drinking some Bin Tangs in the evening? Then the cosy bar Oxen Free is a recommendation. This bar and restaurant can be found at a sidestreet of the well known Jl. Malioboro. I’ve visited this place several times in the days that I was in Yogyakarta, to drink a cold beer in the courtyard!
Jalan Sosrowijayan No.2, Yogyakarta, Indonesia

The House of Sate: Of course you can’t leave Java without eating some satay! For the best satay in a hip restaurant you go to The House of Sate.
Jalan Prawirotaman 1 No. 27, Yogyakarta, Indonesia 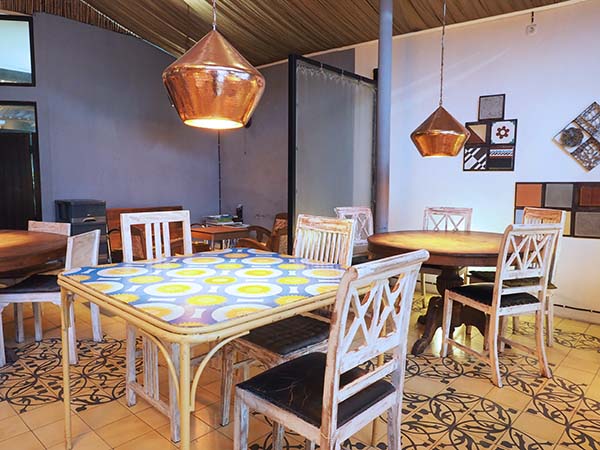 The House of Satay

Nanamia Pizzeria: Having some pizza cravings in Yogyakarta? Then go to Nanamia Pizzeria and find a place in the garden to have some food. A small Italian restaurant where you can also order pastas and other small dishes besides pizza.
Jalan Tirtodipuran No. 1, Yogyakarta, Indonesia 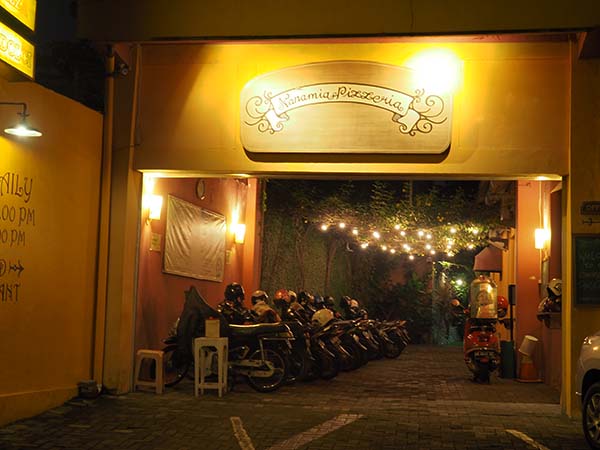 Stupa Restaurant by Plataran: When you’re travelling through Java a visit to the Borobudur is a must! A nice place to have lunch afterwards is restaurant Stupa, from where you have a beautiful view of the rice gields and you can even see the tops of the Borobudur tempel.
Borobudur, Magelang, Midden-Java, Indonesia 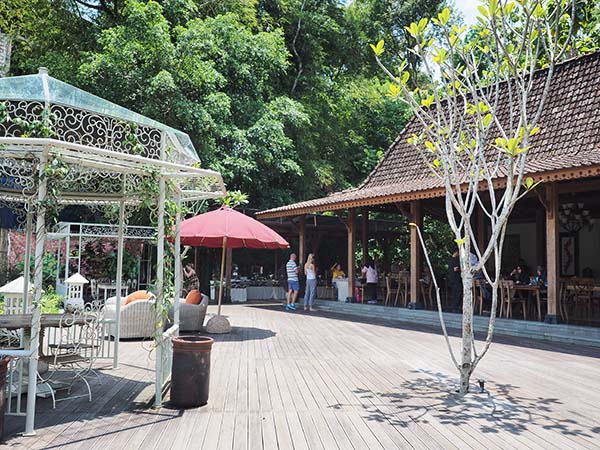 PS: It’s not uncommon that restaurants and hotspots switch from owners in Indonesia, so make sure to check if the restaurants and tips from this blog are still open before you’re visiting them. Put them in your Google Maps so you can easily find them while strolling around. Read this blog about tips on how to use Google Maps on your trip! 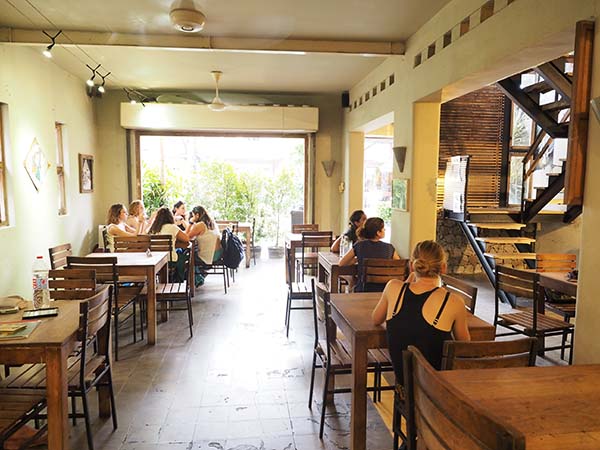 This is how you get there: There are several airlines that fly to Java daily. Of course you can fly directly to Yakarta and then on to Yogyakarta, but it’s also fun to do a stop-over in another cool city like Singapore or Hong Kong. In that case, fly with Singapore Airlines or with Cathay Pacific. They even often have a direct flight to Yogyakarta!

Looking for more tips on Indonesia? Check out Indonesia.travel! 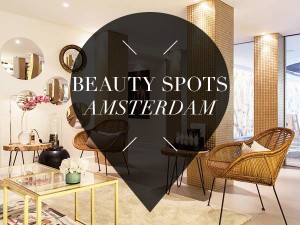