Bar botanique is a tribute to the old living room of east!

After a renovation of months Bar Botanique in Amsterdam-East will open the doors on June 15. This is that new bar in that old building, where first de Ponteneur was. For twenty-five years this has been the living room of East, until the place had to shut down. And it was something special, de Ponteneur. Here the terrace was never empty and it was the hangout of all the neighbours. Which made it the favourite spot of a varied, but cozy public.

And that’s something that Willem – the new owner of Bar Botanique Amsterdam – wants to pursue as well. With the new renovated bar he wants to pay a tribute to what once was de Ponteneur. So yes, he has been renovating, but he did his very best to not chase the spirit of de Ponteneur away. And that’s welcome news to all Ponteneur-lovers. Because the old ‘vide’ (loft) has remained the same and the open windows have been restored. Bar Botanique – as the name suggests – adds a tropical twist. Think much green, as well in plants as in the furniture and lots of cozy armchairs and settees. And very important: the terrace has also remained :-)

From June 15, Bar Botanique is open as the new living room of East for both known as new audiences. And all day. Because here you can enjoy breakfast, lunch, dinner and drinks. If the cuisine is as good as the interior, it’s sure is going to be great. About that cuisine, this is mediterranean and for the quick go-getter they also have delicious pizza’s. Cannot wait to taste the food!

Check their Facebook-page for more information! 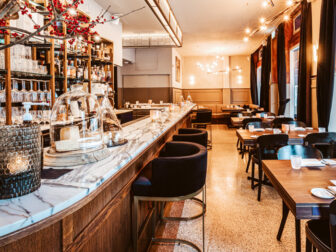